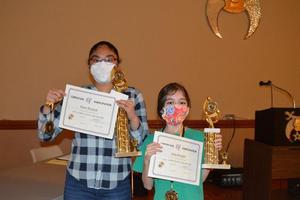 Participants in the 2021 Glynn County Spelling Bee received a few additional instructions than they have in past years.

Along with the usual guidelines — speak clearly, say the word before spelling it, do not try to respell a word once a mistake has been made — participants in this year’s event, held Tuesday, had to keep in mind the new procedures required by the pandemic.

Students were asked to remove their masks while spelling each word and to be patient while the microphone was cleaned between every participant. In the smaller audience, which was seated spaced apart inside the Shrine Club of Brunswick, each person wore a mask as well.

But the spirit of the contest remained, and the participants, who ranged in grade level from fourth to eighth grade, had plenty of spelling prowess to show off.

In words of encouragement before the bee began, judge and retired Brunswick High instructor Stephen Kipp commended the students for putting themselves outside of their comfort zone, to stand up in front of an audience and test their spelling skills.

“I’m just so proud of all of you for being here today, especially these brave spellers,” he said, looking over at the students. “Some of you looked away when I said that.”

Kipp paraphrased a quote from Nelson Mandela and reminded the students that bravery is not a lack of fear but instead a conquering of fear.

“He said something like — it was a lot longer, I shortened it — ‘Courage is not the absence of fear, it’s to overcome that fear,’” Kipp said. “So it might come as a surprise to you, to hear that people who are courageous have fear but those who have courage decide if it seems like a good risk to go ahead and participate anyway … So I really admire y’all for doing that.”

The spelling bee, hosted by the Glynn County Association of Educators, lasted 10 rounds. After a first round, in which no contestant was eliminated, the words quickly became more challenging to spell.

By round five, only four spellers remained, and they were being challenged with words like “balderdash” and “moxie.”

By round seven, only two spellers were on stage — Julia Knight, a fourth-grader from Glyndale Elementary, and Kara Nuque, a seventh-grade Needwood Middle student.

The girls knocked out words like “amphibian,” “condemn,” “raucous” and “encore,” before Knight stumbled over “consecrate” and Nuque claimed victory by correctly spelling “adulation” and then “megahertz.”

Nuque will go on to compete virtually in the Region 8 District Spelling Bee on Feb. 27.

Emotions ran high at certain points in the bee, with audience members quietly but audibly celebrating a correct spelling or expressing disappointment when their speller slipped up. But, as Kipp noted at the start, each participant in the contest had the opportunity to grow from the experience.

“If we never do anything that challenges us or makes us nervous, we don’t grow as much as we could otherwise,” he said. “Another famous person, Eleanor Roosevelt, said, ‘Do one thing each day that scares you.’”